Okay, you’re probably thinking, “Wait, what? Humans aren’t a fantasy race! That’s, like, elves, and dwarves, and dragons, and stuff.”

Yes, but, if you think about it, humans really are a fantasy race. After all, how many fantasy novels have you read that haven’t had humans? Okay, that’s not really the best answer, but seriously, the humans in fantasy stories are often fairly unlike the humans in the real world, and if you consider the genre of science fiction, it’s sometimes even more apparent. Take the world of Harry Potter, for example. You essentially have two races, or rather, two sub-races. You have wizards and witches, who are born with the ability to work magic, so much so that they need to learn how to control it or else be a danger, and you have Muggles, who have so little magical ability that they may as well not even try.

As far as Harry Potter witchcraft goes, we’re all Muggles. We can’t wave wands and say words that send another person flying through the air, or turn teacups into toads. The wizards of the world J.K. Rowling created are a different breed of human, with a genetic difference that makes them…something else.

In Tolkien’s world of Middle Earth, it’s even more apparent. The Numenoreans are considered one of the races of Man, that is, humans, but they live more than two centuries on average. Really, they’re descended from both elves and humans, and so they’re a sort of half-elf with a human heritage. The point is that they’re considered to be human, and yet they’re different from humans.

Here’s an example from science fiction. On Doctor Who, the characters often go into the future, so far into the future that humans aren’t really humans anymore. They evolve, change, and become something else. Likewise, on Enterprise, the prequel series to the Star Trek franchise, the character of Daniels is asked, “Are you human?” His response? “More or less.” 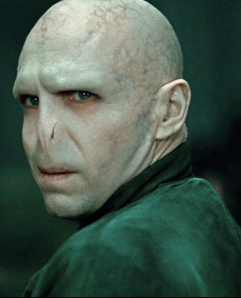 Yes, even Voldemort is human. No, really!

Why do we even use humans in these stories? For science fiction and contemporary fiction, it makes sense, because we’re writing about our world, this world, where we already know humans to exist. When we write about other planets, or other universes, why would there be humans? I think it’s because we need someone to relate to. That’s why portal fiction, which involves a character from our world entering another world, exists. The other world may not have humans, but the human character is someone we can understand.

If you’re not writing portal fiction, though, but writing about a world separate and apart, why use humans? Like I said, someone we can understand. We know human psychology, more or less, and we know human physiology. We have a basis to work from in describing and comprehending the world of the story.

That said, I still hold that humans can be considered a fantasy race. In a fantasy story, we can make them whatever we want, change the entire species according to our whims like some cold, capricious god of literary madness. If you change them too much, of course, then they won’t be humans anymore, but suppose you want to give everyone some kind of magical ability. It shouldn’t be too hard to justify it.

It can also be tied in with the creation myth. In my world of the Three Realms, humans are descended from the Ancient Race, an original race of people created by Ilahar for the middle realm of Yma. When the lesser gods rebelled, they took many of the Ancients and corrupted them, turning them into other races, including elves and orcs. Some of the Ancients fled, however, and went deep underground, eventually being changed by proximity to arcane forces deep within the planet. They shrank in size, lost almost all magical ability, and became so short-lived that they could barely even reach a century. In short, they became humans.

That’s just one example that you could use. Perhaps you have a plant-god who grew the world out of the primordial soil, and humans were the sprouts that grew from it, giving them a deep connection to the ground. Perhaps you have a pair of warring gods who slew each other, and humans rose from the blood that spilled onto the ground, and so you have a warlike world where the natural inclination of humanity is to kill and destroy. (Shocking, right?)

World myths are full of the creation of Man, and each one shows how they view humanity and the world around them. What are your humans like, and where do they come from?